When it comes to evolution, the technological world constantly has something new to offer. With mobile applications being such a crucial part of our lives, the number of Android apps released each month has surpassed 100,000 and 30,000+ iOS releases.

Choosing a language or framework that performs poorly might severely limit your chances of success. Flutter app development is our option to create beautiful, effective, and efficient apps.

The most valuable aspect of the Flutter app development services and framework is that it provides a native bridge, allowing our skilled flutter developer to accomplish virtually anything that Kotlin/ Swift/Java/dart can.

Flutter is the finest example of a dependable mobile UI framework that Google has launched, because of their free and open-source mobile app SDK for creating high-quality native interfaces on cross platforms at a record speed of 120 FPS.

What is the Flutter?

Flutter is a Google-developed, open-source Software Development Kit (SDK) that allows developers to write a single code for both Android and iOS apps. Flutter makes it easier for developers to create interactive user interfaces. Additionally, it takes less code to sync and refresh the app's view. It is one of the most used SDK by developers according to Statista.

Flutter is a cross-platform UI toolkit for mobile, web, and desktop applications. Small businesses and big brands use Flutter, including Alibaba.com, The New York Times, and Abbey Road Studios.

It makes use of Dart, an excellent programming language and a straightforward technique for designing and developing beautiful apps. Material Design for Android and Cupertino for Apple platforms are included.

Who should give Flutter a spin?

Flutter 2.2.0 is a minor yet major update. Following the successful launch of Flutter 2, Google has indicated that it intends to continue improving and developing the framework. Flutter is starting to grow up.

Flutter 2.2.0 was unveiled at Google I/O 2021. There are almost 1,000 PRs in flutter/flutter merged and other projects. Flutter Web, iOS enhancements, a new Dart release, new packages, tool improvements, and so much more are all included in this version.

Now we don't have to be concerned about our framework's future because Google intends to make a lasting impression in the field of cross-platform mobile app development.

The three changes in Flutter 2.2.0, that are important for developers to know are:

1. Support on Dart and Docker on Google cloud officially.

On Docker, we're receiving tested and certified Dart images that enable AOT compilation. Before switching from front-end to backend development was slightly tough as backends written in Dart were not a popular choice.

With this upgrade, that individual may simply move between platforms whenever you feel, without having to wait for modifications to be changed in the backend. They're even working with community packages that will allow us to leverage Cloud Functions in Dart, allowing us to employ serverless solutions.

This update is for the preview mode and should not be used in production. Google has finally fixed the infamous iOS jank.

We, as Flutter developers, are aware that the problem with generating shaders occurs only under specific circumstances, so we can prevent slowing down rendering. However, from the user's perspective, when this occurs, it is a severe issue that, in the worst-case scenario, will cause them to uninstall the application.

Google proposed caching shaders so that they are ready before the first frame. However, it was only compatible with OpenGL. We know this since the issue persists on iOS with Metal enabled by default. The option to warm up shaders will also be accessible with Metal, with this new version.

Google gives the impression that this framework belongs to you, the developers, rather than to Alphabet's shareholders.

Community appreciation is the ideal method to build your product from a marketing standpoint. The more you interact with your community, the more feedback you will receive. Your consumers are the best beta testers for your product. Flutter is in the same boat. Google also acknowledged the community in Flutter 2.2.0.

Read more about Version 1.0.0 to understand these updates better.

Why Has FLutter SDK Become a Trend For Mobile App Development?

Many of today's most popular platforms are contemplating the usage of development packs that are both dependable and successful feasibly and innovatively. The new edition of flutter is a comforting framework that assists with the building of cross-platform apps.

Flutter has successfully brought about a significant improvement and advantage to the method involved in the production of mobile apps.

The name of the game when it comes to mobile app development is speed. Here's how Flutter strikes the target for developers: Any code changes are immediately reflected in the app. Flutter's hot reload functionality allows you to experiment, develop UIs, add features, and correct issues fast and simple.

It is known that the performance of Flutter app development is better than React Native.

Why not create apps for both iOS and Android at once? Flutter app development services also enable developers to construct flutter apps that are simple to design, collect, code and deploy across several platforms. Flutter gives you access to easy cross-platform mobile app development tools that save you time and eliminate the difficulties that come with simultaneously building two apps.

Apps built with Flutter take advantage of the framework's comprehensive feature set, which includes all of the current libraries. The flutter gadgets, which offer plenty of visual nuances for active app development, are one of the primary reasons why firms employing flutter app examples enlist big brands.

Furthermore, flutter is a recognized framework for creating seamless user interfaces in a variety of areas, including utility, preparation redirection, wellness, e-commerce, wellbeing, and social. Developers can examine how to test systems, equipment, and emulators have progressed.

The Flutter SDK is comprehensive, easy to comprehend and learn, and produces fantastic apps, making it a perfect choice for an MVP.

One of Flutter's most powerful features is the ability to change whatever you see on the screen, no matter how complicated it is. It is typically feasible to create a highly customized UI on native platforms, although the effort required to vary by an order of magnitude. Material design and Cupertino Widgets make it possible to build responsive apps with a pleasing user experience.

Developers of Flutter apps have access to a large number of widgets that may be reused and tweaked to build beautiful user interfaces.

Building a single codebase rather than two is a clear advantage. Due to a shorter development cycle, fewer developers, and less complexity, it is cost-effective. As a consequence, you'll be able to release two Android and iOS apps sooner and on a tighter budget.

There are no additional charges for supporting older operating systems with Flutter.

Let's have a look at the most appropriate kind of apps you can make with Flutter.

High performance is critical for a successful app, especially in the gaming sector. Flutter, is quicker than other frameworks, with a frame rate of 58 frames per second. Games must operate smoothly and efficiently.

One of the most popular areas for app development is on-demand apps. Flutter app development offers native-like performance, outstanding design, and a wonderful user experience, making it the market's go-to solution. Some other apps that can be made with Flutter are fitness apps, social networking apps, photo or video apps, shopping apps, finance, business, music, and entertainment apps.

As previously said, the flutter framework has grown in prominence and recognition in the mobile app development market, particularly in the last several years. When viewed from the perspective of a flutter app development firm, it is clear that Flutter is one of the best options for application development.

Flutter allows ambient computing, allowing applications to run on any device, including mobile phones, laptops, desktop computers, wearables, televisions, and smart displays. Flutter app development framework will save you money, time, and effort. Flutter is fantastic! It caters to both new and established businesses by providing extremely low app development prices and aiding app developers with functionality and features, not to mention speed and usability.

With our flutter app development, you can create apps that operate on mobile, web, and desktop from a single codebase. It saves you money by eliminating the need to hire separate teams for each app requirement. We build attractive and functionally-rich mobile apps, tailored to fit your unique demands, at Terasol Technologies, a leading Flutter App Development Company. Contact us to build a beautiful app for your business. 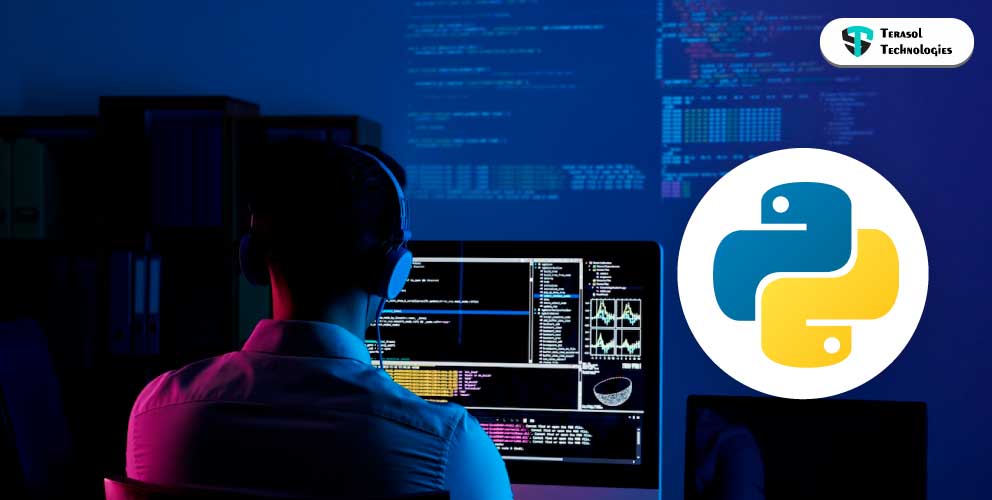 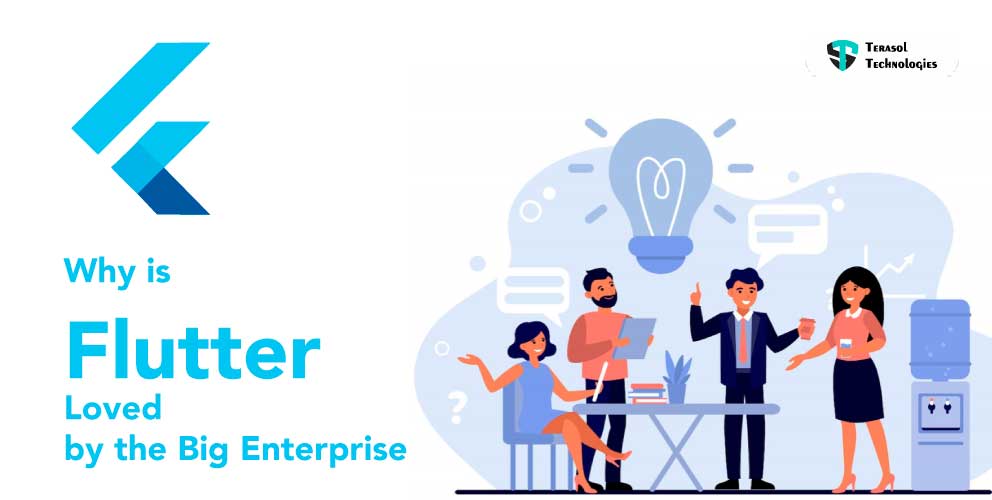 Why is Flutter Apps Loved by the Big Enterprises? 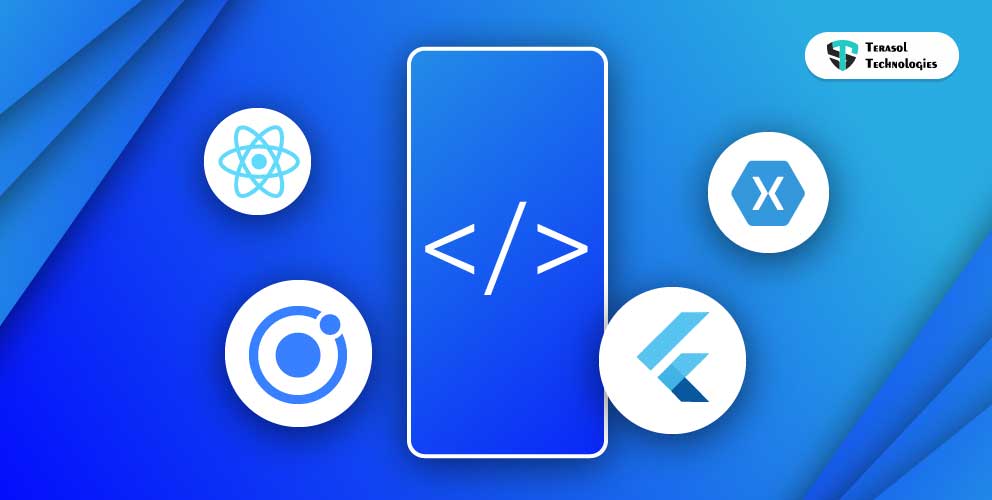